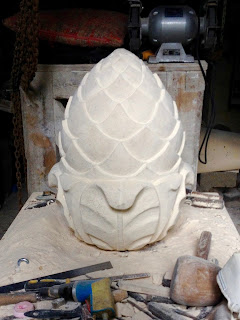 This is the current state of the pineapple. It needs a bit more tweaking before I do the things that have to be done to give it a little more humility for when it takes its place on the empty pillar next to its much older brother.
I need help from a younger person, but I cannot seem to find anyone who would fit the job description. My erstwhile glamorous assistant  - though talented - turned out to be what a very generous person might describe as 'unreliable'. Strangely, I wish I was the only person whose job has been badly affected by the Covid business. I might be getting more sympathy and offers of help right now if I was.
I went to my stone-supplier (or the only one I have dealt with before who is still in business) to ask him to cut some stone fore me which I had previously bought from someone else. He thought about it for two seconds, then blurted out a price which made me visibly blanch. So much so that he asked me if I was shocked. I couldn't deny it.
I pleaded poverty and blamed it on Covid (brushing the previous 40 years of incompetence and mismanagement under the carpet). He said that all builders and masons have so much work now that they cannot keep up with it. I reminded him that I was not a builder or a mason.
It is true. Anyone involved in the building industry can pick and choose whatever work they want from the developers and private owners who are clamouring to spend money on property right now. House prices have risen by over 12% since the beginning of lockdown. The pineapple job was as a result of a chance meeting with a property developer who was granted permission to develop an abandoned pub on the condition that she replaced the missing pineapple on the gateposts attached to it.
I have been staring at that thing for a long time now - too long - and have had plenty of time to consider the much-used symbolism of pineapples as compared to the actual fruit.
It is as if telephones existed back in the 17th century, and one day a traveller in an exotic land called a friend back in England and attempted to describe what a pineapple looked like. Half way through the call his money ran out and he was cut off. His friend then tried to relay the description to a stone carver, and so we end up with something which looks like a cross between a fir cone, a hazelnut, an acorn and a cabbage.
at June 12, 2021