Not made in Panama 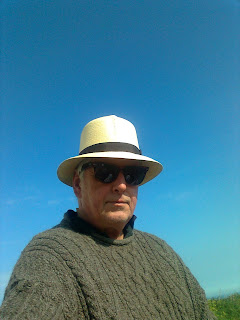 I am envious of all my bald and balding friends. They have a legitimate excuse for wearing hats in the sun, whereas I have so much hair that I don't need to. It's not fair.

I can be forgiven for wearing a hat in the Winter but, as yet, I have never found one which I like enough to be able to disregard the furtive sniggering and sarcastic comments from my bald friends. You remember my search for the Basil Rathbone hat of the 1930s-40s. Well I am still looking for it.

I love proper, well-made Panama hats. I have one now which has an extremely tasteful brown band, not the run-of-the-mill black as all Chinese £10 rip-offs do. It is sitting upstairs in a darkened room.

I once had a beautiful Panama (see above photo) which I liked so much that I gave it as a special present to my shaven-headed German friend, Thömas (see below photo). I was even crass enough to tell him how much it cost (a lot) so that he fully appreciated the gift.

He opted for Fatherland mode on the grounds that - even though he was raised in the North - his parents made him wear lederhosen as a child. It's true. I've seen the photos.

Over the coming months he would often refer to the Panama, assuring me that he used it almost every day. The next Summer he arrived in his open-top vintage MG sports car - wearing the hat.

I don't know what he had done to it, but it would not have looked out of place on the head of a donkey. It even had holes for the ears. I was speechless.

That hat is a testimony to the strength of our friendship. I would have sent anyone else back to where they came from and would never have spoken to them again. 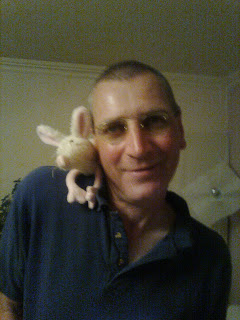