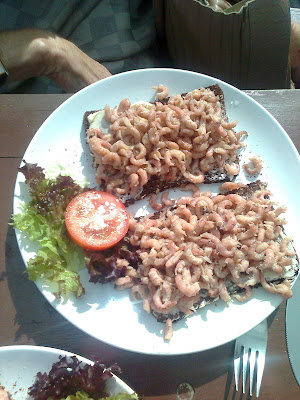 If you order 'Krab' in a North German restaurant or cafe, then you will be served with a generous handful of these little bastards which are known in Britain as 'Brown Shrimps' and would normally come from Morcambe Bay before being skinned (with compressed air) cooked, and put into a little pot with butter to be sold for about £5. My disappointment at not eating crab was short-lived, though. They are 'extreme tasty' (as Thomas would have it) and great value for money. I only managed to eat half of the above plate. 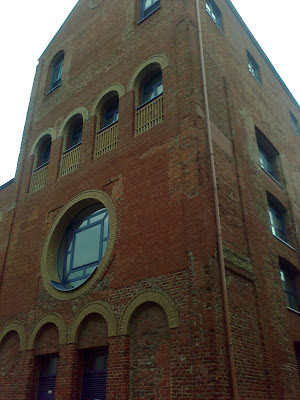 Aside from traditional fishing and seamanship, Bremerhaven is remembered for another, more poignant and melancholy reason. If you live in the U.S.A. and have German ancestry, then the chances are that your Great, Great, Great, Grand Parents spent their last night as native Germans in the above building, before boarding a sailing ship the next morning and making the epic journey across the Atlantic to start a new life in the Big Country.
Thousands of Germans left their home country in the 19th century to begin afresh in America by boarding ships in Bremerhaven, and this place was the final, overnight holding-centre before the tearful fare-wells on the dock the next day. There is a large and modern museum for all the immigrants right on the dock, and every year many German-Americans return to look up the huge quantity of records that are archived there. Some of the names of the departed are engraved into the cobblestones that surround the place. 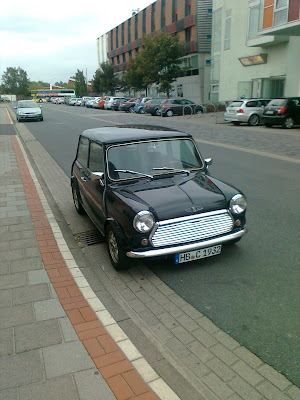 My friend Thomas is a classic Anglophile - he loves anything British and particularly things from the 1960s. This is his prime mode of transport right now (he has brought this Mini to England many times), but soon he will be visiting us in his newly restored M.G.
For some reason, he decided to give us a guided tour of the dyke area of the North Sea coast yesterday, whilst delivering us to Bremen airport for the flight home. He is 6' 3" tall like I am, but he is 10 years younger than me and does not suffer from stiff knees. The trip to Bremen from Bremerhaven normally takes about 40 minutes on the autobahn, but yesterday it took about 2 hours, half of which was passed traversing the rough cobbled roads of the dozens of small villages on the way.
Being somewhat smaller than me, H.I. was stuffed into the back of the Mini before I squeezed myself down into the front seat with my knees smashing against the dashboard with each small depression in the road. The whole experience was made even more pleasant by the strong aroma of exhaust fumes and leaking petrol from the ancient Dinky-Toy, and when we finally arrived at the airport to begin the rest of the hellish journey home, we were both feeling quite nauseous. It took about a minute for me to get out of the car.
The final part of the trip back to Bath was a 3.5 hour drive down the M4, made about 9 hours after we set off, so you can imagine what language I used when I shot past the junction for the M25 off the M11 as we hurtled toward central London and the congestion-charge zone. At least I made this mistake in a relatively comfortable Volvo.
I turned around in the Watford area and headed back north. I slept very well last night...
Posted by Tom Stephenson at 04:04