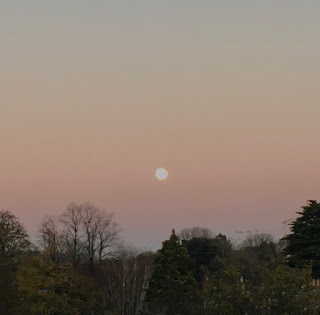 The full moon rising yesterday at dusk. With my photographic equipment (an old phone) you will never see the crystal clear magic of it, or the wonderful colours of the sky around it.
So Harry and Megan waited a few weeks after the Queen's funeral before they set Netflix off with the series for which they were paid millions. The bad blood blood is boiling over.
I didn't exactly warm to Megan at the start, but thought she might bring a little freshness into the family business. Little did I know she would start hammering nails into the coffin. Harry's bitterness is all down to the hounding of Diana by the media and the taking of sides by the BBC. The 'three people in this marriage' interview was granted by blatant and criminal forgery. Anything for a good story.
I am a monarchist and I don't like the idea of a so-called democratic republic. Soon they will turn the House of Lords into an elected establishment. I don't know whether that will be an improvement on what we have now, which is new peers created by whatever government is in power, but elections have gone sour over the past few years. It has been proven that you cannot trust the public to make the right pragmatic decisions when it comes down to it, so - bad as it can be - I would prefer to rely the sense of duty which was supposed to be instilled in the aristocrats long before they inherited the titles. That will never happen now unless we get a dictator.
at December 08, 2022