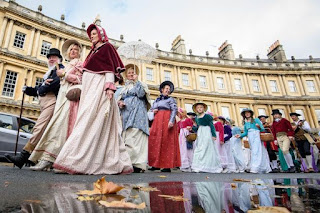 I have not had much to do with blogging recently. The main reason for this is that - as the sun sinks in the Autumn sky - our computer is positioned toward the South windows and it becomes very difficult to read text when you are dazzled by it reflecting off all the light coloured junk on the desk. People who have dark backgrounds to their blogs make it even more difficult. No blame attached to this. Also, Blogger will not let me in through my phone.

There has been a few remarkable incidents here over the last week or so. A gangland machete attack with police helicopters and armed response cars, a large house fire in a B&B pub a few doors away from us which left tourists out in the street in pyjamas and dressing gowns, a street brawl within sight of our compact but adorable city apartment involving groups of men, one of whom tried to set alight his adversaries with a large can of petrol. Things have changed a bit since Jane Austen trolled about a couple of hundred years ago.

We have just had the annual Jane Austen festival, during which hundreds - literally - of men, women and children promenade around in fancy dress for about a week. Most of them cannot resist using their mobile phones when in costume, which is a very incongruous sight. I have heard them talking to each other as they pass, and a very high percentage are not from the U.K. You hear Spanish, Japanese, American and many other languages coming from the Austenites. Personally, I would not visit Holland and willingly dress up in their national costume from 200 years ago, even (or especially) if they did have a writer who I greatly admired.