The days when you could give it all up 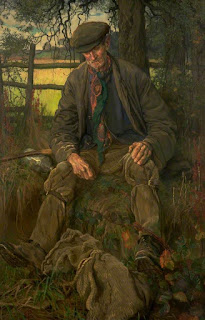 Britain's old 'men of the road' disappeared - or, more accurately, died out - years ago. Three generations of urban alcoholics and drug addicts replaced them, and they never properly die out. Fresh members are recruited all the time.
Tramps, as the name implied, never stayed in one place. They walked about so that they could never be moved on when their faces broke the unwritten law of being overly familiar. Some had regular circuits and some just went North to South (usually that direction, I think), a journey by foot which would last long enough to see out their lives with no particular destination in sight.
Driving with my father one day, we spotted a ragged vagrant in the incongruous setting of our leafy suburban road, and he wished out loud that he could swap places with him. I asked him if he was serious.
"No job, no house, no wife, no children, no cares."
I remind myself that he was going through a rough time, but he got over it.
at May 26, 2022