The King of Prussia 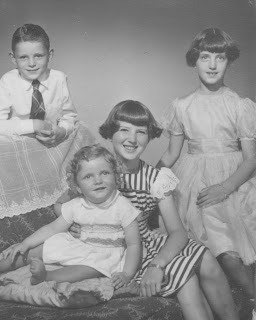 My daughter is doing some family research right now, which explains all these old photos turning up here. Can you spot me? I'll give you a clue - I was the youngest of four.
During her researches, H found a lost cousin of mine who I did not know even existed. She now lives in America and is the same age as me. As mentioned previously, my father and his brother fell out badly with each other, so a large chunk of Harry's history is lost to us. The sister on the top right (now deceased) went to visit Harry and his wife at the pub in Kingsbridge, Devon, and brokered a meeting between the two men which I - as already mentioned - attended. That was the first and last time I met that aunt and uncle.
Sharon in America filled in a bit of forgotten information by telling my daughter the name of the pub. It was called, 'The King of Prussia' - not easily forgotten, you would think. The two brothers had a sister called Olive, who must have fell in the middle of the dispute. I remember Olive, as I met her a few times at Christmas. There was another sister called Iris who I knew well. Iris and husband Alf came to stay every Christmas and I would spend a lonely two weeks every Summer in Brighton, where they lived. I remember the Mods versus Rockers battles on the seafront. 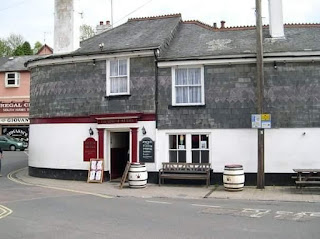 This is The King of Prussia as it is now. It has recently been in the news for only serving locals. That's me excluded then.
at January 15, 2022