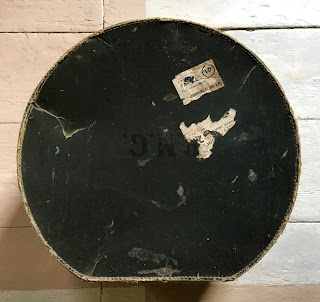 My search for the perfect hat has come to a natural end. If I found it now it would be too late to wear it. If I found it 20 years ago it would have been too early. There might have been a brief window which passed by, but I don't think so. I think I will die hatless.
What brought me back to reality after a 20 year hunt for it was seeing a man in the street wearing it. My heart skipped a beat when I saw him and I was just about to run up to ask where he found it, but then I paused for a moment to ask myself, 'Do I really want to look like that?'
If it had been Basil Rathbone himself sauntering along with it coddling his beautifully coiffured head, I would have come to the same conclusion. It is not 1936 and he could pull it off then, but not now.
That wonderful old hatbox could tell some stories, but they might be boring ones.
at December 04, 2021