Give me a clew 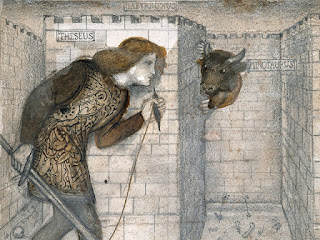 Charles Dickens did not like being laughed at, I heard the other day.
The nautical term, 'four sheets to the wind' refers to ropes and not sails as you might expect. 'Sheets' is the nautical term for ropes.
The word 'clue' also refers to ropes. It began when Theseus entered the Minotaur's maze and left a string or cord behind him so he could find his way back out. The original word was spelt 'clew'.
I learned all sorts of other things last week, but cannot remember what they were. I will probably wake up in the middle of the night and remember them, then I will phone my friends and impart the knowledge.
For my friends, it will be like the scene in all those movies where the detective is lying - fast asleep - in bed next to a beautiful woman after exhausting himself with (we assume) several hours of energetic passion. The phone on the bedside table begins to softly ring and continues to do so until a blind hand appears from beneath a satin sheet and fumbles at the handset, almost knocking it off the cradle.
In a voice saturated with sleep, he answers it, then - a little more animated through anger - he says, "Do you know what time it is?"
He remains prone whilst listening to a voice on the end of the line for a few seconds, then sits bolt up, now fully awake.
"What?" he exclaims loudly, "You mean to say that the word 'clue' is related the ancient myth of the Minotaur and actually refers to a rope or a length of cord?!"
The beautiful woman next to him begins to stir restlessly then drowsily asks, "Who is it... what do they want?"
"It's nothing honey. Go back to sleep", he replies as he quietly replaces the receiver back in the cradle.
He remains sitting upright for a while, thoughtfully staring to one side of the camera as he takes in the full meaning of what he has just heard.
Can you imagine it?
at December 02, 2021