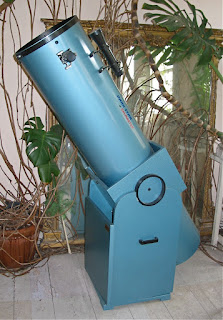 The last post drifted toward astronomy and reminded me of this 12 inch Dobsonian reflector which I bought from the maker in Mid-Wales some years ago.

He was a down-to-earth Lancastrian and he could immediately tell that I was making the classical mistake that all amateur star-gazers are prone to do, and that is buying something too big to practically use from a top floor flat in the middle of town, but he wanted to sell me a 'scope.

It was the biggest telescope I could find which I could (then) just about carry upstairs and downstairs on my own. It ended up as a very imposing conversation piece, and I constantly had to correct everyones' unspoken suspicion that I must suffer from a haunting sense of inadequacy, either psychological or physical. I may do, but A: that is none of your business, and B: in the telescope world, size matters a great deal.

Telescopes are not rated according to their magnification power. The most important feature of a celestial telescope is its power of resolution. The bigger the mirror or lens, the more light it gathers, and light is data. This 12 inch mirror could distinguish between two drawing pins placed one inch apart from a distance of over a mile. That is resolution. In the digital world, images are measured in pixels. If you want to project an image clearly on the side of a bus, you need a very powerful camera in terms of pixels. Ok, I think I have explained myself enough for you to put away those unworthy thoughts so I can get on with the rest of this post.

About 15 years ago I realised that Mr Toad and I have a lot in common. Since I was a young boy I have tried out obsessions on all manner of things, never becoming an expert in any of them. For the last 30 years I have been very attracted to fly-fishing, or at least the idea of it. I have bought all the kit - flies, rods, landing nets, vintage game bags, etc - but have only actually fished once.

I spent a few years obsessing over vintage and antique shotguns, shooting 6 or 700 cartridges out on a farm once a week in all weathers. I inherited tweeds from a dear old (and large) friend who was a true countryman, not just a Toad like me and my gun-owning playmates.

I have come to understand that it is the accoutrements of these activities that I am really interested in, not the activities themselves. I prefer the tools of the trade to the trade itself.

There has been one exception to this, but only due to necessity. I began my proper career by being obsessed with all the tools used in the shaping of stone which have remained unchanged for hundreds, if not thousands of years. I have a vast collection of them which I have never considered selling, because I cannot sell them without losing my income. But, unlike the old days, if I can do something quicker by using a power tool, I will.

Like Toad, I soon tire of the games and sell the toys before moving on to the next one. In my mind I see it as ticking-off as many fun things to do as I can before I finally tire of the Great Game and move on for good.

Lately I have been wondering what the next obsession is going to be, but have come to the conclusion that I have run out of enthusiasm. I am going inward now. Winter is coming and, as with all the seasons, I am looking forward to it.