I think my husband suspects something 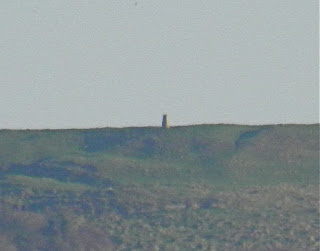 The trig-point on the highest part of Solsbury Hill - the one Peter Gabriel climbed up and later spoilt a perfectly good song by claiming he saw an eagle flying over Bath. Nobody likes liars.

I took that photo from the middle of town using max zoom on my crappy camera. Well it wasn't that crappy when I bought it, but later ones are now so good that they are often used to make professional videos. Someone recently made a full length feature film using only an iPhone.

I once (more than once, actually) had a simple affair with a married woman. She lived in a house in a park on one of the steeper sides of town.

I was in her bedroom one afternoon and noticed a pair of binoculars lying near the window, so I picked them up and looked down to a pub which was about a quarter of a mile away. I can never resist looking through binoculars and I took the opportunity to see who was in the place. I knew most of them.

As I scanned the pavement outside, I saw her husband looking back up at me with another pair of binoculars. I cannot describe how shocking that sight was.

The next time I saw him the atmosphere was a touch frosty to say the least.
Posted by Tom Stephenson at 05:41