Bad manners at the breakfast table 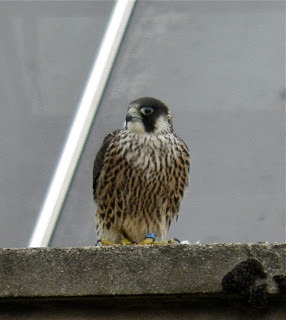 I looked out of the back window of our compact but adorable city apartment this morning to see this very unusual sight - one of the Peregrine Falcons sitting on the opposite wall, looking very disgruntled and ducking every time a gull swooped low over his head in an attempt to scare him off. This one is obviously known to the authorities, as you can tell by the blue ring on his left leg.

It took a while for me to understand why this Falcon was sitting there in such a vulnerable, low position, then I saw why - he was watching another gull eating his hard-earned breakfast (photo below), and wondering if he would ever be able to reclaim it without having his eyes pecked out.

The Peregrine's technique for catching very fast pigeons (pigeons are the fastest creatures on the flat, reaching speeds of well over 115 mph) is to fly above the victim and, using their super-sharp eyesight (which is what they try to protect by not approaching big-beaked gulls unless they really have to), dive down onto their prey at speeds of up to and over 200 mph, making them the fastest creatures on the planet.

They slam into the pigeon with their massive talons, then continue the dive whilst selecting a nice, flat, hard piece of ground against which they smack the pigeon, finishing it off before they take the carcass away to a different spot, where they eat it.

The flat roof which this Peregrine chose to impact his breakfast against, happened to be the territory of that pair of gulls who let their chicks wander into the scorching July sunshine and die in an act of neglect (if neglect could be an act) which would put them in prison if they were of our species.

After about 5 minutes, Perry gave up and flapped away to pursue something else from the menu. Their menu is pretty varied, and often includes quite rare - and slower - songbirds in town and these gulls are too big for them, but at least that feral pigeon did not go to waste. 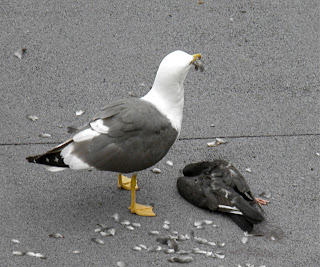