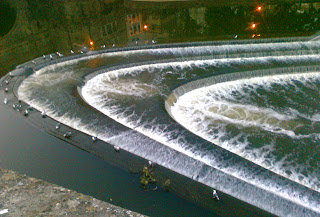 This weir provides a constant  undercurrent of soft noise at the front of our place, as well as a communal bath-house for all the gulls in the neighbourhood. It changes colour by the week as well - at the moment it has the mid-summer hue of moss-agate.

Every time I renew our contents insurance, the woman on the other end of the phone asks if our compact but adorable city apartment is within 400 metres of water, and I reply that although it is, if we were to get flooded, then so would the entire county of Somerset. Only the communications mast on the highest point of the Mendip Hills would be visible.

It is ironic that the most beautiful places in a landscape are also the most dangerous, as they often involve great heights or large volumes of water. I have seen two people die here - one who dived from the wall where this photo was taken and hit rocks only two feet beneath the surface, and another who drowned in her upturned canoe as her companions paddled all around her, unaware of her plight. This is going to sound a very morbid thing to say on such a sunny afternoon, but death is such a strange thing to contemplate, especially when it is offset by paradoxical humour.

Thomas and me were walking to the pub the day before yesterday when we saw a slow-witted pigeon get struck by a car. It flopped about horribly on the pavement as we approached, turning involuntary somersaults as it tried to take to the sky in vain. A couple of women were standing near it, wondering what to do.

We took it into a nearby car park and finished it off as gently as possible. Unfortunately, there can be nothing gentle about this sort of thing, but it's the thought that counts.

Later in the pub, I told Thomas the story of how I humanely dispatched a wood pigeon out at my workshop which had been left in a field by a hawk when it's breakfast was interrupted by a human.

One of the guys out there is a keen bird-watcher, and a vegetarian who abhors guns and all they stand for. It was him who called me that day, asking me to bring in a shotgun to finish the stricken bird off, as he could not bear to watch it all day or finish it off himself.

Of course, using a gun on a static pigeon could well be described as over-kill when a good whack with a stick would do the job more quietly, but I brought a gun in anyway, just because I wanted the vegetarian to understand that they did indeed have their uses sometimes - and he asked me to, which was too much of an intriguing and out-of-character request from him not to oblige.

I knocked on his door whilst holding a little .410, and shouted, "It's the vet!" Then I crept up behind it and popped it off.

When I told Thomas this story, he came up with a brilliant suggestion which I wish I had thought of at the time.

"You should have got him to throw it into the air for you and have a bit of sport at the same time," he said, adding, "Sometimes it is best to lose some respect in these situations."