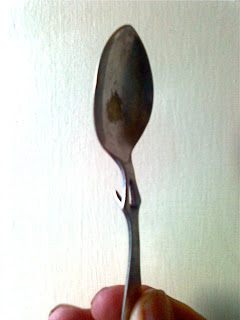 Breakfast in the garden of the cottage in the Cotswolds, and toast and marmalade is on the menu.  I notice the spoon above, and I marvel at the simplicity and effectiveness of the (patented) Victorian design.

A little hook has been punched out of the body of the spoon, so that it can be hung from the edge of the jam jar, avoiding getting sticky jam onto the upper body of the stem.

I express my admiration for it, but this is mistaken for crude avarice, and Colin says that it is mine as a gift.

We go to leave, and Colin washes the spoon for me, then insists I take it away as a gift. I gladly accept, and I have used it 4 times already, the last time being tonight, and the first time being when we got home two days ago. 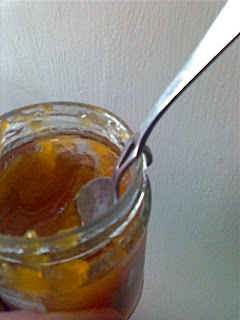 At breakfast in Bath the next morning, I offer marmalade to Thomas the Panzer, with the spoon hanging sweetly on the side of the jar. He takes some, then plunges the entire spoon into the marmalade, covering the stem in sticky sugar.

And I thought that Germans had an eye for good design and engineering. I have forbidden him to ever use this spoon again, but I will probably relent when he returns around September.
Posted by Tom Stephenson at 12:38