The buzzing of bees on a hot afternoon 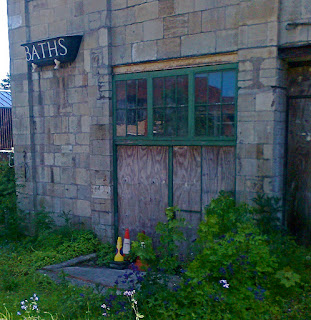 Arriving in town a little earlier than usual yesterday, I wandered down to my old workshop, just to see how it was getting along without me.

It felt a little melancholic, with bees buzzing around the Himalayan Balsam which has crept up from the river and prepares to come into flower right on the threshold. Why did they bother to board-up the doors? All they have done is block off the little hole I cut in them to allow Widdy the Cat free access. 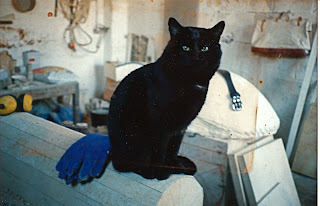 I would arrive in the mornings, and Widdy would be there to greet me - more interested in the love and attention than he was in the food I gave him. He was a huge and gentle tom, never showing anything other than unconditional love. The hours I spent coddling him must have added an extra couple of years to my life, and I wish I could return the favour. Of course, he wandered off one night, never to return. I hired a row-boat and spent two days going up and down the river, calling his name to no avail. He would be dead by now anyway, so the blocking-off of the door does not matter anymore.

All the things which have happened at this place. It used to be the stable for the builder's horse, and pencilled on the wall was a short list of the dates from when it was last shoed by the farrier. The last date was in 1928, if I remember correctly.

Prince Charles came to visit me here - I remember noticing the small scar on his face from a Polo accident as a younger man. My posh clients who were visiting me at the time, screamed at him not to touch the stone item I had made for them as he bent down to look at it, and he stood up with a shocked expression on his face. I would think that nobody had ever talked to him like that before. When he - almost sheepishly - asked them why not, they explained that if HE touched it, then it would be worth even more than I had already decided to charge them for it, and they didn't want to pay.

Gary Lineker came to collect something from me one Saturday, and there was a bizarre situation whereby he stood - outside, for some reason - counting a great pile of twenty pound notes into my hand as schoolboys stood around, waiting for an autograph from their hero. I told him that it was beginning to look like the video from the Bruce Grobellar sting.

In the heat and quiet, just off the main road, I peered through the crack in the door to see what was inside these days. When my eyes adjusted, I began to make out vast quantities of police road-cones and empty plastic water-bottles.

Then it dawned on me. The place is now used as a storage room for the annual Bath Half Marathon.

I ask you, the Bath Half Bloody Marathon. What a waste. 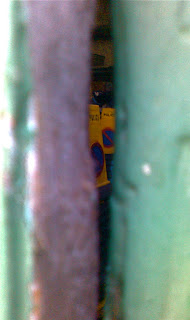