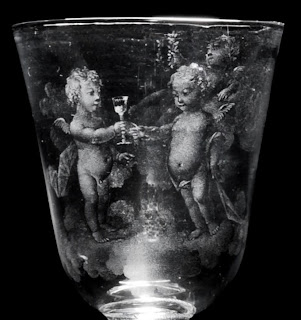 Cherubs - my life is dominated by the little bastards at the moment, but I won't bore you with the work-related details.

I just came across this photo of the best bit of 18th century glass engraving I have ever seen. The crazy thing is that you can actually only see it in certain lights, and I know the photographer spent all day trying to get those lights just right. I also know that the maniac who once owned this glass could not afford to keep it, and it probably sent him mad (or madder) to have to part with it, after a brief period of ownership.

Circumstances have put the brakes on my little obsession with early drinking glasses, but I still get the odd twinge, and I still buy the odd candlestick, in case you were worrying.  Right now, I am just concentrating on trying to pay the bills, but the work I do have on the go is the sort I used to dream about having when I was in my 20s. Now, the truth about banging your head against a brick wall being nice when you stop has never seemed so obvious.

Maybe I have post-Glastonbury blues? I hear that Mick Jagger spent the night here in the Royal Crescent Hotel after prancing about at Pilton last night, but I don't think I will be going up there to catch a glimpse of him being whisked away this morning. I don't think he ever was one for throwing TVs out of hotel windows or driving limousines into swimming-pools, but I would definitely go there today to witness him doing that, aged 68 or whatever he is.

I have been waiting for a phone-call from Mick for about 4 years now. A friend of mine who did a bit of work for him at his house in France gave him my number, along with a recommendation for the quality of what I had to offer, and - apparently - Mick said he would get in touch with me. See? I think I'm on first-name terms with him already.

But like I said above, work is work, no matter what it is and who it is for, so I haven't been holding my breath. I still have the same mobile phone number as I first had about 20 years ago though, so I think he must have lost it. Good job I have plenty of other stuff to do.

We found a new restaurant just around the corner last night - well, new owners in an old restaurant. It is a tapas-type establishment, run by real Spaniards. The waitresses are also Spanish and last night I was reminded of how all Spanish backsides (on young women) have a similar sort of look to them. I wonder what sort of evolutionary gene-pool it takes to give a whole nation of women that distinctive sort of backside? Seriously, I really do.