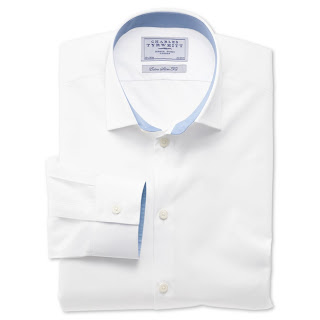 With the money I saved when I spent £175 on a £3,500 Georgio Armani suit (made in Italy) I have so far bought a black pair of Crockett & Jones boots (Made in England) and this classic Jermyn Street, Charles Tyrwhitt white shirt (made in England). I saved even more money on the shirt, because it came from the Bicester Village outlet, and cost a mere £19.95.

What do I do with the rest of the savings? Well I might pop over to France and buy 660 pairs of canvas slip-on shoes, but that seems a little excessive. Mind you, I am 62 years old, so I stand a much better chance of getting through 660 pairs of cheap deck-shoes than I do of wearing out my three pairs of Crocketts before I die - especially when you consider the wet summers we have been experiencing for the last three years.

Then again, with a bulk order like that, I could probably go straight to the factory in Bangladesh or wherever, and get about 3000 for the same price, as well as saving money on transport to France. I had better be quick though, just in case the factory collapses and kills the workforce before they have had a chance to complete the order.

No, I don't think so. I will continue to set an example to the rest of the Europe when helping the British economy and traditional craftsmanship by paying through the nose, even though we are getting conflicting advice about saving versus spending as two alternative ways to save the economy.

My slight feeling of guilt about buying an Italian suit rather than a Saville Row one is mitigated by the fact that it was actually made in Italy rather than China, where many Italian designers now go to get their clothes made.

I have to hold my hands up and admit to having a dirty secret now. I buy cheap socks, and I don't know where they are made. Having a pair of size 12 feet which rip through socks at a rate of one wash per pair, I just cannot resist buying those packs of five socks for about £3. I buy cheap underwear too.

So when you see me sauntering down the street dressed in thousands of pounds worth of fancy clothes and boots, you don't see what they are hiding - unlike the advertising bands of boxer-shorts worn by fashion-conscious men who have them sticking up above the waists of expensive jeans so you can read them from a distance.

Discretion is the word, especially if you have dirty secrets.