I am a unicorn 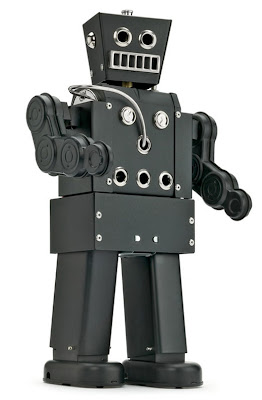 There has just been a short clip on the radio of two robots talking to each other for the first time - by which I mean that two robots have been given the opportunity to verbally interact, not that this is the first time they have met.
The clip only lasted for about 20 seconds, but the style and content of the conversation was depressingly familiar, and ended up with an unresolved argument between the two which - given the reason (or lack of it) for the argument and the fact that robots do not require sleep to recharge their batteries - is probably still going on now.
One machine had a male voice, and the other was equipped with a female one. That, I believe, was mistake Number One by their creators, and it was such a basic one that it set the tone for the entire experiment, and they will have to scrap the voice-boxes and start again if they want to learn anything new from the exercise.
Right from the beginning, the two interrupted each other, prematurely reacting to a question or statement which had not finished leaving the speaker (by which I mean 'mouth'), but - being radio - I could not tell whether or not they had been programmed to visually recognise that the other had not yet finished talking, or if it was a simple case of bad manners in both parties.
I cannot recall the precise words, but the gist of it went like this (please remember that there are no pauses between each sentence, just like a real conversation these days):
Male: "Hello. How are you?"
Female: "I am good thank you. How are you?"
Male: "I am good thank you. How are you?"
Female: "I just told you. I said I am good thank you."
Male: "I am good thank you. I am a robot."
Female: "I am a robot too. We are both robots."
Male: "I am a unicorn."
Female: "You just said you were a robot."
Male: "No I didn't. I am a unicorn."
Female: "I remember you saying that you were a robot. You are a robot."
Male: "No I didn't. I am a unicorn. I would not have thought that a robot like you would have any problems with your memory."
And there the conversation was curtailed for lack of air-time, but you could see where it was going.
I hear conversations like this between men and women with artificial intelligence every night in the pub. Let's hope that they do not fit bionic livers to the robots and introduce them to alcohol - there could be a whole new school of philosophy built up overnight.
at September 09, 2011