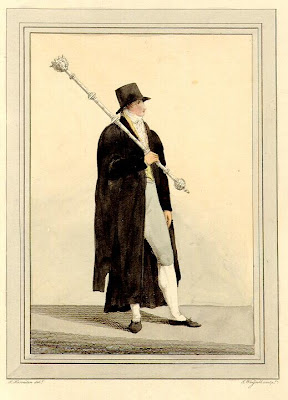 It is the season for dishing out degrees to graduates, so the streets around Bath's Guildhall are strewn with young people incongruously dressed in Mortar-Boards and gowns - proud parents in tow - off to collect their Desmonds.
When I lived in Cambridge, the slogan "Why won't the gown mix with the town" was being bandied about by the 30% or so of working-class residents who made up the servants to the ancient institutions, but the only effect that Bath University has on the town is best observed between about 9.00 pm and 4.00 am, when the cream of our local academic intelligentsia go around in groups of about 20, mixing with the town by kicking in windows and urinating in private doorways. The last University bus goes up to the campus at 3.30 am - usually with about 3 people on board.
I wrote a letter to the principal of the University once, begging him to reintroduce the ancient system of college 'beadles' in order to police the streets at night, but received no reply. I was not suggesting that the beadles should carry cudgels like the 17th and 18th century ones did (that would have been too much to hope for), but I did suggest that they should be invested with the power to recommend expulsion for persistent offenders. I knew that this, too, would be too much to hope for, because the University of Bath depends on it's income from the attendance of these blockheads, and the ancient 'house' system with associated honour and historical traditions has never existed in our 'red-brick' (cast concrete), science-based, educational establishment.
In 18th century Cambridge, there was a famous late-night incident when a beadle and his runners apprehended a group of young trouble-makers after a protracted chase and struggle. When the beadle shone his lamp into the faces of the lads in the darkness, he saw that they did not belong to his college at all, but a neighboring one, so he consequently had no power over them. He said, "Forgive me, young sirs - I mistook you for gentlemen", then reluctantly let them go.
If you have read 'Porterhouse Blue' by Tom Sharpe, then you will perfectly understand the protocol observed by the glorified care-takers who make up the gate-keepers and beadles of the ancient universities of Cambridge. Sadly - with the influx of wealthy, foreign students - the power of the beadles has diminished drastically, and they no longer have the ancient right to crack a student's skull with a cudgel whilst apologising for their roughness and calling them 'Sir'. In any event, I think that if the post of 'beadle' were to be re-introduced these days, it would attract the wrong sort of applicant, judging by the calibre of 'City Marshals' we have in the streets today.
Traditionally, beadles were elderly, ex-military men who had served in a war - or at least served at the college since their youth - and controlled their runners with military discipline, having instilled in them a pride for their house so fierce, that they would be prepared to die for it.
A friend of mine graduated in Cambridge a few years ago, and she invited me to her graduation ceremony, which was to be held in the famous Senate House in the town. We all piled through the great doors of the building, and every college member was dressed in the gowns of their houses. African and Chinese parents were also dressed in their finery, and the doors were closed behind us as the last seat in the house was taken.
It was only then that my friend told me that nobody was allowed to leave - even to go to the toilet - for the entire duration of the ceremony, which was expected to last for about 3 or 4 hours, and was to be conducted exclusively in the archaic Latin language.
One after the other, every single student was presented to the president by his or her tutor, who made an elaborate speech in Latin whilst bowing and genuflecting toward the house and the dignitaries. Each speech was identical, and toward the end, I knew it off by heart - though I did not understand a word of it, and neither did most of the tutors, who recited it in parrot-fashion.
Never was a cigarette so appreciated as on the college green outside, about 3 hours afterwards.
Posted by Tom Stephenson at 01:22