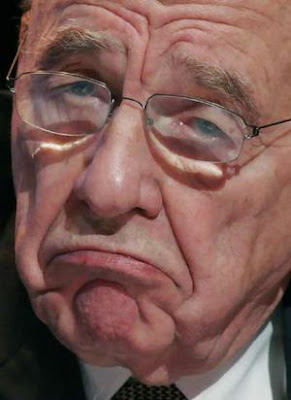 If you live in Great Britain, you cannot help but be enthralled with the continuing breaking news with regard to the appalling scandal involving the hacking of mobile phones belonging to murder and terrorist victims by employees of 'The News of the World' newspaper, which has now been disbanded after 168 years of publishing in London.
If you are unaware of the scandal, then you will have certainly heard of the paper's proprietor - Rupert Murdoch, the naturalised American Australian who - along with his son, James - heads many media organisations including Fox News, B Sky B, and News International, the overseer of the soon-to-be-defunct News of the World.
There had recently been a phone-hacking scandal (which pales into insignificance compared to the enormity of the deletion of the personal voice-mail messages on the phone of murdered Milly Dowler, causing the police and her parents to believe she was still alive at the time), but the earlier scandal involved the hacking of politician's phones, so consequently nothing was done about the practice for fear of incurring the wrath of the Murdoch empire, who had the power to make or break any politician's career at will.
Months before the successful election campaign of the despicable and ambitious ex-prime minister, Tony Blair made a special trip to Australia to kiss the arse of Rupert Murdoch in order to ensure his backing. He knew that without Murdoch's support, he stood no chance of being elected and - as soon as he got back - the Sun newspaper switched allegiance from Conservative to New Labour, ordering it's idiot readers to vote for Blair. This they did, and it soon cost the lives of thousands of innocent men, women and children in the Middle East.
Murdoch's pay-back for this little favour was to be allowed an unprecedented strangle-hold over every area of British media, and by being permitted to create his vast monopoly which stretches right around the world, he had ensured himself unprecedented power over Western politicians, only rivaled by the buffoon Berlesconi's in little Italy. The difference between the Murdochs and Berlesconi is that they have politicians to do their dirty work for them like puppets, and they are careful not to get caught with their trousers down.
The Murdochs think they have solved the problem of one or two rogue journalists in The News of the World by shutting down the paper altogether - costing the jobs of hundreds of (almost) innocent journalists in Wapping, but the female executive who heads News International retains her job and - presumably - the support of the Murdochs as well. I wonder how long for.
Within the few days that it has taken these events to unfold, all the spineless and terrified members of parliament have been released from the tyranny of the Murdoch empire and now feel safe enough to call for blood, since it is unlikely that any scandal involving their own personal lives that has been gleaned using illegal methods will come to light in the way it could have done only last week.
All, however, except one. It turns out that the chief culprit responsible for making the lives of the parents of murdered Milly Dowler even more miserable (if that could be conceivable) was recently employed as press advisor to our present prime minister, David Cameron, and his arrest by the Metropolitan Police is expected today. There is just one problem with this, though - certain officers of the Metropolitan Police have benefitted to the tune of millions of pounds by selling prejudicial information to News of the World journalists, and are themselves about to be arrested by a different Police Force, for fear of a cover-up.
Meanwhile, the Murdochs are planning a replacement sunday 'newspaper', and it is widely believed that the Sun will be that paper, with a few glossy supplements added. All the spineless, sacked journalists interviewed on BBC radio this morning, refused to condemn the News International chief executive for what has happened, because - since she has kept her job - it will be her who will be looking for another set of journalists to run the new sunday paper, and they would quite like a job on it, thank you very much.
If there was ever an argument for keeping an independently funded news organisation like the BBC, it has never been so strong as it has been the last few days. Only last year, the Murdochs were calling for the privatisation of the BBC, on the grounds that it had too big a share in an unfair market, despite the fact that it does not advertise, and this resulted in massive cut-backs in the World Service. Well, now the Murdochs can fuck off.
Posted by Tom Stephenson at 00:59