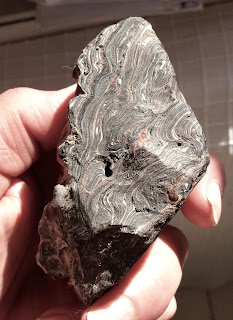 I think that a lot of people have a tray somewhere, filled with many small curious objects which are better at gathering dust than all other parts of the house put together, with the possible exception of under the bed. This thing came from ours.
It was sold to me (yes, I actually bought it) as some sort of mineral or semi-precious stone, partly because of its weight. I recognised it for what it really is - the accumulation of different coloured paints from the floor of a Victorian workshop - and I still bought it.
What gives it its weight is all the lead in the paints. There is bound to be a lot of arsenic in it too. Arsenic Green is a delightful colour with unfortunate side-effects. Those Victorians really knew how to poison each other.  They used Red Lead to make the skins of oranges that little bit more orange, which can be a big problem if you make marmalade from them.
A while ago I was restoring some Georgian panels which had cavorting cherubs painted on them, and I needed to buy some Flake White lead oil paint. I naively went to the local art shop where I was offered a non-toxic substitute which just did not have the same quality as the real thing.
I called up a large and famous London outlet and was told that they had it in stock but could not sell it to me because I was not a professional. I told them that I was a professional and they asked me to prove it. Apparently you have to be on a register as a qualified historic conservator. I gave up and used the substitute.
Did you play with lead soldiers when you were a kid?
at April 23, 2021