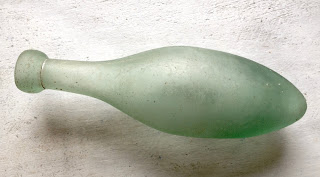 I pulled this old bottle out of the room which is sometimes called 'the office', sometimes 'the box room', sometimes 'the spare room', depending on the state it is in. 'Box room' is a polite way of describing its state right now. I have been intending to clear it out for quite a while, but since the charity shops have been closed for a year and I have not had the heart to bin treasures like this, 'box room' it remains until further notice.
The last person who drank out of it has been dead for quite a while. I was wondering how much of a while and decided that this is a 19th century bottle. Usually one might roughly guess at the age by describing it safely as 'mid nineteenth century', but after I photographed it just now it told me its exact age to the year. When I loaded the photo onto the computer it gave itself the title of IMG 1859. So there we have it. Either the last user communicated from beyond the grave, or the flask itself told me.
When I look at this type of bottle, I am transported back to the sunlit meadow from where the man in the straw hat forsook his deposit and threw it into the nearby river, having drained the last drop of pop the glass amphora would ever hold.
In the intervening years it grew patches of iridescence as the water - aided by the soda flux - began the long process of turning the silica back to the earth from where it came. Soda glass containing soda water. It takes a long time - maybe a little longer than nuclear waste does when it is trapped in glass, or maybe not. Time will tell.
I miss rubbish dumps. I miss the medieval ones - haunted by Red Kites - without the city walls. I miss the ones of my childhood, haunted by the Crows and Gulls which inherited them from the Kites. I reluctantly admit that there are too many of us producing too much uninteresting but dangerous rubbish to have open tips now, but there were always treasures to find in amongst the detritus if you were a child, rich with time to spend on a long, hot Summer day.
at April 10, 2021