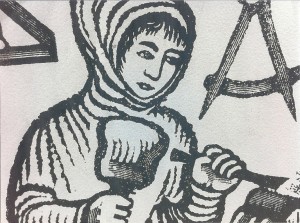 I am amazed at how many of you want to see more of the pineapple carving process. I have been really looking forward to the weekend, when I have the excuse to get away from it for a couple of days.
On many occasions when my workshop was in the middle of town, a besuited office-worker would enter the dusty shop and watch me for a moment, then express his desire to have a job as simple and satisfying as how he perceived mine to be. It was always a 'he'. Women are far more practical and find romance in much more sensible choices of career, although I have known a few disturbed female stonemasons.
My response was always to ask them to imagine what it would be like to spend all day, every day, covered in dust and hitting a lump of stone over and over again in zero temperatures. None of them would believe me that I truly envied them of their jobs in the Winter, or my prediction that they would not last one hour if they walked out of their office and into my workshop to begin a new life and an eight hour shift. A couple of them even asked if I took on apprentices.
If anyone now asks me how to go about training to be a stonemason with aspirations toward more intricate carving, I tell them to seek employment with a conservation company. If you begin life as a simple mason, that is how it usually ends, after about 40 years of gruelling and unwinnable battles against the most unforgiving enemy that you are ever likely to encounter in the natural world.
I think I have already told you about the one exception to the case, but I will tell you again because he refreshed my faith in humanity with his totally realistic and unromantic attitude.
He was an American tourist who turned up at the doorstep of my workshop one day, standing there and quietly watching me as I hammered away at a block of stone. Eventually, during a lull in the hammering, he came a little closer and I braced myself for the usual outpouring of admiration and respect for this ancient and arcane craft, kept alive by European heroes like me for thousands of years.
Instead, he said, "My GOD. That must be so BORING! How do you stand it, day after day?"
at April 17, 2021