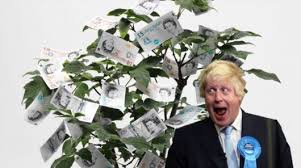 Think yourself lucky that I was incommunicado during the budget.
The only point in Rishi Sunak's announcement that sticks in my memory is the generous 1% pay rise for nurses. Until inflation rises above 0.7%, this will mean that every nurse in the country will be able to afford one cup of Starbucks coffee per day without eating into their housekeeping. They should make the most of it while it lasts.
The opposition, of course, said that one percent was risible, but failed to quote any figure at all above it. The unions had asked - as a starting point - 12.5%, but Labour wouldn't even recommend 5% in the unlikely event that they might have to foot the bill.
In effect, nurses have had a pay-cut of only slightly less than the rest of the public sector, and this at a time when the government can pick trillions from the magic money tree and spend millions on secret  procurement contracts under cover of Covid darkness.
Can you imagine the demoralising effect that this is going to have on the health sector who have been working under almost unendurable conditions for over a year to keep people alive and who are expected to keep it up for another year until we are all safe again? It is predicted that people will leave an already under-staffed service in their droves once things get back to what we used to call 'normal'.
at March 08, 2021