Searching for The Green Man 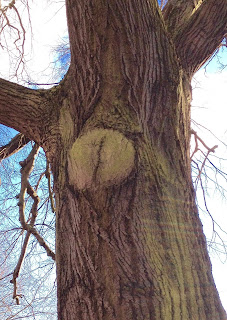 In the days when I would occasionally employ masons to help me with a particularly heavy workload, if his C.V. proudly displayed a single photo of a 'Green Man', I would send him away without a second thought. Every budding carver feels he has to make at least one Green Man early in his career, and showing it to an old cynic like me is the equivalent of admitting that you once had a child part in 'Oliver' to a theatrical casting director. I did employ some female masons and carvers, but they were all wise enough not to show me their Green Men.
I looked up in Queen Square yesterday to see the arse of a Green Man shamelessly poking through a hole in a large tree for all to see, and I cannot tell you how refreshing it was to be treated with such disrespect by the wild and Pagan spirit of Springtime. Any mason carving one of these would have instantly got the job.
One of the presenters of Country File visited the workshop of a retired old geezer who did a little woodcarving in his spare time, and was given a mallet and chisel to try his hand on some very two-dimensional oak leaves emanating from the mouth of one of the many Green Men littering the shed. All this man carves are Green Men, and I can honestly say that I have never seen worse ones.
This sounds a bit harsh, but in the unlikely event of him ever reading this I am not trying to hurt his feelings but it has to be said. There are plenty of very good Green Men hidden away in the rafters of medieval churches, but you have to look hard for them. Unlike the modern versions, they are discreet to the point of secrecy.
In the tiny hamlet of Conkwell near Bradford on Avon, there is a small and ancient spring which issues from the foot of the steep hill, and it has been known as 'The Green Man' for hundreds of years. It was the only spring which was not poisoned by Oliver Cromwell's troops when they were camped nearby, and is still surreptitiously regarded as sacred by most of the locals.
There is a running joke attached to it which is probably almost as old as the spring itself. Long ago in the past, the mischievous locals put out the rumour that 'The Green Man' is a pub in Conkwell, but failed to mention that it only serves Adam's Ale.
Even when I lived there in the 1980s, we would still get confused visitors searching for the pub and being shown the bright, sparkling spring of clear water instead. The old ones are the best ones.
at February 28, 2021