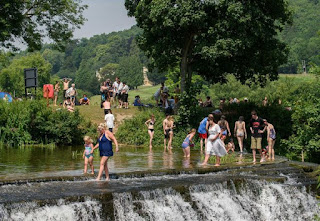 Listening to Pritti Patel the other day, I was trying to think who she reminded me of when she spoke. Then I realised - Bertie Wooster. She misses the 'g' off any word ending in 'ing', just like the old English toffs used to up until fairly recently.

What are your bank holiday plans? Mine involve the two household activities which I hate the most - plumbing and decorating. I have to change a tap-washer in the kitchen (which I am also re-painting) and fit a new water-softener cartridge to the water heater. Sounds simple, doesn't it? Believe me, it isn't. I won't go into the reasons because I don't want to think about them. My excuse for the conversational use of apostrophes dotted all over my posts is that it would sound (in your head) too formal and stilted if I did not. See what I mean?

The last hot weekday brought thousands of people to the beaches to crowd together in huge groups, so God knows what will happen on this bank holiday Monday, which is set to be warm and sunny. There is a local beauty spot near here called Warleigh Weir, and for years people have swam there, leaving literally tons of rubbish behind when they go home.

Last week (or was it this week? I lose track of time these days) We drove past it and there were never as many cars parked on the verges as there were then. Literally hundreds of people must have crammed into the short stretch of water which has the weir. There were so many cars that the police had put warning signs either end of the half mile of illegal parking. It must have been horrible, even without the threat of death by virus.

Everyone thinks it is their right to walk in the middle of the road now. There was a father carrying his toddler daughter on his shoulders, strolling down a fast stretch of the A36, on his way to Warleigh Weir. I had to brake hard and sound the horn.

My prediction is that either a second lockdown or a second wave will be triggered by people like this. Oh well, back to the plumbing.
Posted by Tom Stephenson at 03:53