Taking a Sea Lion for a walk 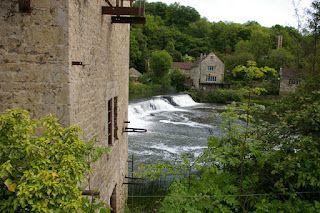 I once spent a winter living in the little converted mill cottage you can see hiding in amongst the trees to the right of this photo.

The noise from the weir was so loud that you would have to almost shout to be heard above it. It was constant and strangely tiring. I believe it sent me slightly mad.

It was also the coldest house I have ever lived in. Normally used as a holiday let in the Summer, it had an electric meter which gobbled up 50 pence coins in a matter of minutes with the heaters on, so I hardly used them. I once went to bed leaving a glass of water on the side table. In the morning it was completely frozen - solid from top to bottom.

This was the place where I once ate a pike. It was left on my doorstep by some local anglers and when I got home in the evening it was still alive. Despite my best efforts, it did not appear to die until two o'clock the following morning. I have since learned that you should put pike and eels in the freezer to kill them gently.

One Summer day when I was re-visiting my old home, everyone in the pub garden (out of shot) was looking out over the weir saying that there was a diver in the water. As I looked, a black, sleek shape would surface briefly before diving again. I later found out what it was when I went down to the river bank.

A massive Sea Lion suddenly stuck its head out of the water and floated there looking at me inquisitively. Its whiskery face seemed to smile at me like a dog, so I took it for a walk down river. It followed me all the way there and back, then disappeared when I left the bank. I later found out that it had escaped from Longleat and made the journey to Avoncliff via ditches and streams. It was miles from home.