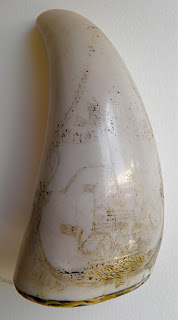 I bought this piece of 'scrimshaw' marine folk-art in a junk shop the other day. It had a label on it which just said, 'Tooth', so I don't think the owner had noticed the engraving of the good ship Maria Regina on it when it was put on the shelf. Consequently, I didn't pay too much for it.

My first thought was that it was yet another of those resin replicas that you see all over the world, but when I took it to the light and examined it with a glass that I carry with me at all times, it turned out to be the real thing. Even my doing this didn't ring any alarm bells with the shopkeeper, so I don't feel too bad about it.

I do feel a bit bad about owning a small piece of whale though, even though it was killed long ago in the early 19th century. They killed so many whales in those days that they make modern-day Japan seem like Greenpeace members by comparison, and at least they used every last bit of the creatures for everyday purposes, from oil-lamp fuel (the main bounty) to corsets, to candles, to cat-food. You can't eat the teeth, so what better thing to do with the ivory than turn it into an artwork?

I have an image of a salty old dog with the stub of a clay pipe in his beard-fringed mouth, whittling away at the thing, then rubbing the incisions with a tiny amount of the pitch used to caulk the boards of the very ship he had just proudly drawn in the tooth. It sounds horribly romantic, but I bet that is not too far from the truth.

Funny how the whaling industry remains steeped in romance to this day, when the reality must have been unspeakably bloody and brutal - both for the whales and the men who harpooned them.

Towing a leviathan 100 miles back to port, then chopping it up with 15-foot knives on the harbour quay; whiling away the hours until the next trip by scratching a little drawing of the mother-ship on the only bits to have no practical use at all - until the old salt adds value to them.
Posted by Tom Stephenson at 01:58