The Fox at Broughton Gifford 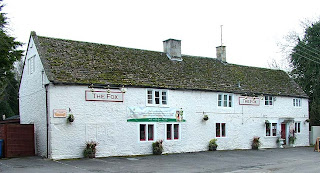 It was the Bride's birthday yesterday, and we all trooped out to The Fox at Broughton Gifford for lunch. Never mind that she got married on my birthday, I still have to celebrate her headlong tumble into middle-age, even though she will be celebrating her anniversaries as I tumble headlong into old-age.

I had thought about proposing marriage to H.I. and tying the knot on her birthday, but I am just not that vengeful. I'm too old to be that vengeful - I haven't got the energy, besides which my prospects are not good enough to make me a suitable catch.

The food at The Fox is of the simple but expensive gastro-pub variety, but with one significant difference. Despite the expense, you are expected to carve your own meat, a whole joint of which is slammed on the table before a knife is thrown to the most able/ hungriest-looking person in the group. If you want roast beef, it has to be ordered 48 hours in advance and it costs £25 per head, so we had all sorts of other animals instead.

Most of these animals (except the beef variety) can be petted in the smallholding to the rear of the pub garden, and you can pet most of the vegetables there as well. I would imagine that if you want to pet one particular animal then eat the same creature afterwards, then you would have to give them 48 hours notice for pork and chicken too.

It reminds me of that apocryphal story about the woman who goes into an authentic Chinese restaurant and - unable to speak Cantonese any better than the staff can speak English - tries to get them to feed her miniature poodle by pointing at it, then pointing at her mouth. You can guess the rest.

I have never felt too easy about choosing my own live fish in a restaurant either. I would prefer to leave it to fickle fate as to which fish ends up on my plate through the hand of it's executioner, or just catch it myself in a river.

The food was good though, but I cannot help thinking that they employ the same technique as I used to when entertaining Sunday lunch guests in the country and making them wait four hours to sit down and eat. It is almost impossible to fuck-up a roast dinner (though I know a few people who can and do), but when you are virtually fainting through hunger, even a cheese sandwich can taste like the food of the gods. I bet that 48 hour wait for the beef does wonders for the reputation of the chef, and - let's face it - you would pay £25 for a cheese sandwich if you were starving to death.

I am surprised that The Fox did not have wasps on the menu, as they had a plentiful supply of them in the garden and hundreds were already marinating in a honey and water sauce trap they had put out there for them. That reminds me of the other story about the man who goes into a pet-shop and asks if he can buy a wasp. The owner says that they do not sell wasps, and the man says, "Well you've got one in the window."

Because we were all driving, we went back into Bath to carry on with a few more beers, and I noticed the A-frame sign to the Tramshed bar where we met up had an old 'white-board' sheet from their last meeting with managers, pinned to the inside of it.

In various coloured, felt-tip pens, some horrible area-manager had written a few bullet-points along the lines of 'BE HAPPY, TRAMSHED TEAM', but my favourite was 'DON'T USE BAD LANGUAGE IN FRONT OF THE CUSTOMERS' That reminded me of my Scottish mate's contribution to the local Women's Institute fundraising market, which was some pots of rather good jam he had made for the event. It tasted so good to him, that he had proper labels printed up with the legend, 'Norrie's Fucking Wonderful Damson Jam'.
Posted by Tom Stephenson at 02:22