40 years in the business, and still as blind as a bat 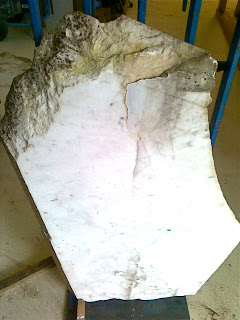 As I have said many times before, everyone who deals with stone or marble becomes cynical, jaded, addicted to harmful drugs or alcohol, finds it next to impossible to maintain ordinary relationships with the opposite sex, and sometimes all of the above,  in a concurrent-running, vicious, downward cycle.

It was quite embarrassing to have to admit that it was me who selected this piece of expensive marble without noticing the blindingly obvious crack running halfway through it, and it was extremely irritating to be reminded that a skant of marble has 'two sides' by the dealer who sold it to me - as seen.

It was also humiliating to have to call him up for an assurance (reluctantly given) that - should the bloody thing fall apart as I try to cut it - he will replace it with something similar at no extra cost. Well, it's no extra cost to him, but it does involve a three hour round trip plus petrol for me, plus I am already having to use another piece of my own marble because this bit is too damaged to get the two bits I had planned for out of it.

Ok, I know I was an idiot not to take a closer look at the back when I was there, but do I really need to be told that? (If anyone says 'yes' to this rhetorical question, they will instantly receive the lightening-blast of the mason's curse).
Posted by Tom Stephenson at 02:03