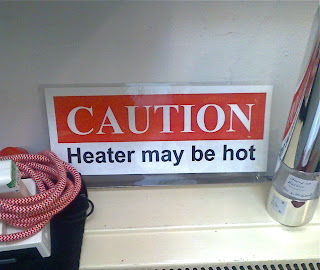 I saw this sign in a charity shop yesterday. It reminded me of the packet of complimentary nuts on board an airliner which had, 'WARNING - MAY CONTAIN NUTS' written on it.

I was in an expensive delicatessen a few years ago, and a trendy, wealthy-looking couple were perusing all the fresh cheeses and other fine comestibles on offer, as if they had enough time and money to spend all day buying everything in the shop.

As they were waiting to be served, the woman noticed a little tray of edible samples on the counter, and picked one of them up. Wordlessly and lovingly staring into the eyes of the man, she proffered it to his lips, and he opened his mouth to receive it. She popped it in with a smile.

Then she looked down at the tray again, and read the ingredients of the morsel she had just hand-fed her beloved with, which were written on a little card stuck into one of the pieces. The things were made with just about every kind of nut that can be found in the world, with a little bit of sugar to bind them together.

She turned to the man - who was still smiling blissfully at her - and screamed, "SPIT IT OUT - NOW!"

He clapped his hand over his mouth and began the undignified procedure as she screamed at the shop-keeper to show him to the toilet so he could rinse out his mouth with a few gallons of water - NOW! His face began to go a deep red and visibly swell as he ran to the back of the shop.

I didn't wait around long enough to see if an ambulance was called.
Posted by Tom Stephenson at 01:45