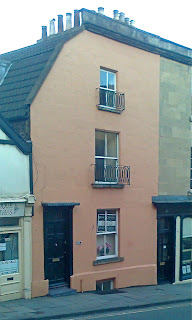 35 years ago, I completely gutted and renovated this little Georgian house for some friends of mine who had just bought it as their first house. I see it has just been sold - again.

The first thing I did was to rebuild the ground floor front wall to make that lower window - during the Victorian period, it had been knocked out to form a wide shop window.

The bulk of the rest of the work was to remove most of the 6 inch internal dividing wall which ran from the basement to the attic. Many grand Georgian houses were built with wide openings in their internal walls, which had hinged, folding panels to enclose the spaces during the winter, but the smaller ones kept single rooms both front and back. The new owners wanted a more airy and light feel to the house.

Removing that much of an internal, load-bearing masonry wall is a nerve-wracking business, as one little mistake can bring tons of stone blocks down on your head, and effectively destroy the house. I insured myself for about £3 million before starting.

This is how you do it:

Having exposed the jointing of the block-work on all 3 floors by removing the plaster, you cut small, strategically-placed holes through which you push short lengths of 'U' section heavy steel channel, which will take the weight of all the masonry above. These are usually about 2 feet apart, and cover a span of about 10 feet, in this case.

Then you place the RSJ steel 'I' beams up against the wall on one side. Remember I said that.

You then go from the top to the bottom of the house, setting up 'Acro' expanding props both sides of the wall, exactly corresponding to each other top and bottom, so that the weight of the entire, 30 foot-high, 6 inch wall is taken by them, with the main weight being borne by the basement floor, which is hopefully sound and compact.

You then saw through the wall, creating 8 foot wide openings, removing all the blocks as you go from the house. You lift the 10 foot steel beam into place (easier said than done), set it on it's bearings and pack the top of it firmly against the masonry above, using pieces of slate which you hammer into the joint until the whole thing rings like a bell. This is done on all three floors.

When the mortar has gone off, you take the pressure off the Acro props with your heart in your mouth, all the while listening for sounds of movement. Usually, one or two little cracks disconcertingly appear, but this is to be expected as the tons of masonry settle into their new - very slightly different - position. Then you can breathe out again.

A friend of mine was carrying out just this type of procedure some years ago, and all was going well up until the last minute. He had placed the props both sides of the wall and tightened them with a hammer, then he had cut the holes out of the main wall and removed the stonework.

It was at this point that he realised that he had forgotten to put the steel beams INSIDE the cage of props, and they were now trapped in the room behind him, with no way of threading them through the 2 foot gaps between the Acros...

There was only one thing for it. He went to the house next door and told them of his predicament. All he could do now was to cut a hole in the neighbour's living-room wall, carry the steel beam into their house and up the stairs to push it through the hole created, in between the props of the house next door.

They eventually agreed to allow him to do this on one or two conditions.

Having paid for the entire family to go on holiday in a luxury hotel for a week, during which time he put their furniture into and out of storage and completely re-decorated the house from top to bottom with professional cleaning to the carpets, he did not make much money on the job.

It's sometimes good to make lists at the beginning of the day. 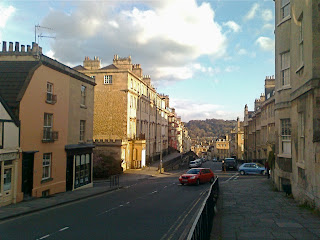