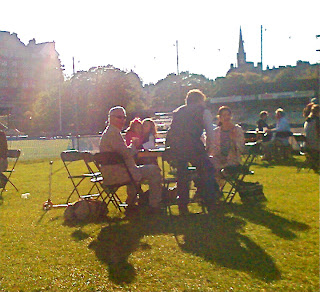 This Bank Holiday weekend is also the start of the Bath Festival and Fringe Festival, and the Spiegeltent has been set up on the Recreation ground for music and theatrical events.

Last night, Georgie Fame played, and earlier in the afternoon, me and H.I. went down to sit in the sun for a bit (I had a few beers too...) and the man himself (plus family) turned up for a sound-check - that's him in the shades.

I think you have to be about 60 and English to have heard of Georgie Fame, but he was the only pop musician I can think of who carried a whole generation along with him by playing jazz in a way acceptable to everyone - even jazz haters. Even my father liked him and would sing 'Get Away' to himself when we were driving away from home on a rare outing.... Go Go Go...

We sat chatting with the Chair of the Fringe, a lovely French woman who has lived in the UK since 1960, so she too knows Mr Fame, but mainly through 'Bonny and Clyde'. At 74 years old, this lady has more energy than I have ever had, and has sat on more committees than most born and bred locals, including the Council. She still retains a strong, French accent (when she mentioned Rory Bremner who she booked for one festival, it sounded like a motorbike starting up), and she told us a story which made me laugh out loud.

When she first arrived in Britain as a young woman, she improved her English as much as possible, but because she worked on a switchboard for calls between France and the UK, she spent a lot of time just speaking French. The natural English-speakers around her never taught her swear-words.

She was having a Christmas dinner with her boyfriend's mother, and felt compelled - as a French person - to compliment her hostess on her culinary skills.

"That was delicious", she said. "How did you fuck the turkey?"
Posted by Tom Stephenson at 03:28