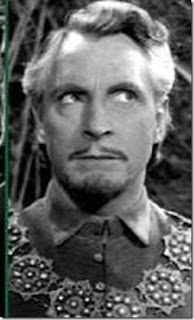 If you want to have your finger firmly on the pulse of Middle-England, may I recommend that you read the blog of my newly found fellow blogger, Jim Froggatt.

It is hard to believe that Jim is the 82 years old that he purports to be, so fresh is his outlook on life and so youthful his attitude toward fried breakfasts and smoking in pubs.

His latest post could be - I believe -  the beginning of a new campaign to rid the Sheriff of Nottingham of the negative image that several hundred years of bad press has created around him, in the same way that the perception of Richard the Third as a murdering hunchback has been transformed to one of a cuddly, disabled and much-maligned English king, thanks to the unceasing efforts of American lobby groups over the last 20 years or so.

When I was a kid, the T.V. Robin Hood was portrayed by Richard Green, and his whining nasal tone and goody-goody attitude was more than enough to make me side with the Sheriff of Nottingham, and the actor who played him (pictured above) must have taken a leaf out of Lawrence Olivier's manual when he gave the 'definitive' performance of Richard the Third.

The reason me and all my friends tuned in every week to the Richard Green version was that there was a rumour that if you watched the speeding arrow shot at the beginning of every episode, at some point a modern telegraph-pole flashed past amongst all the trees. I never saw it, and we did not have freeze-frame facilities in those days. I suspect that this was another modern myth, like the one below.

When Errol Flynn played Robin (as scathingly mentioned by Jim in his post), the whole film hinged upon the reputation of the actor in the trouser-department, and even though the act itself never made it past the censors, it was universally taken for granted that Errol's giant nob would eventually find it's way underneath all those petticoats and heavy brocade, so it really did not need to be anything other than a less than subtle hint about what was going to happen after the credits had finished rolling and everyone had left the cinema.

Well I am in an authoritative position to be able to set the record straight about that - once and for all.

Years ago, one of my many drinking-partners in one of the many pubs was Errol Flynn's cousin. His last name was also Flynn, but I have forgotten what his first name was, as our sessions took place about 35 years ago, and we were simple and fleetingly short-term pub-mates.

The cousin - who had by then retired - was an accountant in the film industry, and was always close to the sets to make sure the productions stayed within budget. Being related to Errol meant that he was bound, from time to time, to work on his films, and it also meant that he spent quite a bit of time socialising with his cousin off-set as well.

The subject of the object of legend was bound to crop up at sometime in the pub, and when I asked the accountant about it, he dismissed it with a weary sigh, as if he was fed up with giving interviews about it.

He had - he explained - been skinny-dipping with Errol in Californian swimming-pools on many occasions, and had never noticed anything out of the ordinary at all.

So next time someone tells you the old story about gaffer-tape having to be used underneath tight-fitting leather britches, you can tell them from me that it never happened.
Posted by Tom Stephenson at 04:57