What is a fascist? 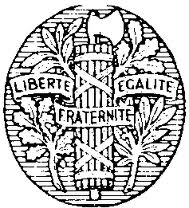 The appointment of an Italian, self-confessed fascist football manager to a British club (which forced a senior British politician to reluctantly give up his lucrative non-executive directorship) recently, has raised the question, 'is it possible to be a fascist and not be a racist?'

The Italian has said that the two are not necessarily connected, but history would seem to suggest otherwise. He said that giving the fascist salute is common practice in Italy, but I've never seen anyone do it. I would like to see him try it in Germany without getting arrested and prosecuted.

The bundle of twigs wrapped around an axe (see the somewhat contradictory French version above!) sums it all up very simply. It is easy to break a single twig, but it is impossible to break a bundle of them over your knee, which have been wrapped together to form a strong faggot (there's another story...) - it is difficult to break a nation which is bonded by a strong, social glue.

So we are expected by fascists to sacrifice many personal freedoms for the sake of the common good, but what is good for the nation is usually open to interpretation. Because fascism is formalised mob-rule, it has been necessary to install a leader as a focal point in every fascist state which has ever called itself that - a Fuhrer. Bees - whether they know it or not - are the perfect example of a society which is run extremely efficiently along fascist principals.

These days, fascism amongst humans is usually practiced unknowingly and unthinkingly, which is why there are not areas set aside in bars for people to smoke tobacco, well away from non-smokers. I am sure you can think of other, recent examples.

Funnily enough, guess where smokers can puff away freely and legally in designated parts of bars, cafes and even restaurants? Germany. They know all about mob-rule sanctified by the state.