The Weeping Wall of Walcot 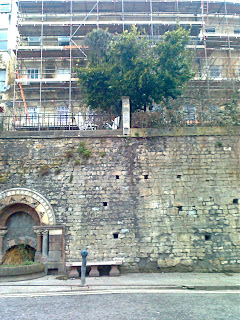 I was walking down this street (Walcot) the other day, when one of the shopkeepers asked me how much I thought it would cost to fill in the unsightly holes you can see in the wall with small, stone gargoyle-type carvings. It turned out that a local businessman and shopkeeper was trying to raise sponsorship to do just that, in an attempt to bring more tourists into the street, in conjunction with postcards of the gargoyles on sale in the centre, so that they could wander around spotting them, and hopefully spending more money in the nearby shops. If you click on the photo, you will see that he has already filled two, at his own expense.

That marble bench with three, red sandstone legs you can see was made by a friend of mine, and is bloody ugly for all the reasons mentioned in the previous posts about public sculpture, and how it has to be vandal-proof and tick all the boxes for Health and Safety, so it would only collapse if that yellow fork lift were to land on it.

The ornate, Victorian Italianate well-head/horse-trough (now dry) to the left has a variety of names, including 'Ladymead Well' and 'Cairn Well', but was in fact the outlet to an ancient spring called 'Winifred's Well' which also has a head in Sion Hill, about a mile away, upwards. It now must continue underground to the river, because it has not dried up, and neither have all the other springs in the area.

The buildings with the scaffold are the backside of The Paragon, which tower a further couple of stories higher than you can see in the photo, and the vegetation is in their gardens, right up against the colossal retaining-wall with the holes in it.

Those holes which appear to serve no other purpose than to provide convenient nesting places for feral pigeons, are - in fact - called 'weep-holes' and are designed to stop the build-up of rain water in the earth behind them, and you can tell they are doing their job, because they are nice, dry nesting places.

The theory is that if the water has no outlet, then it saturates the gardens behind until it turns into a critical slurry, and the weight and pressure of this slurry could -suddenly and without warning - bring the entire wall down along with the hundreds of tons of wet earth behind it - straight through the shop window of the businessman who wants to block them up. There is also the chance that some of the back end of The Paragon could come down as well, if the house has no arches beneath it, or if the arches give way at the same time.

Just after I pointed out this possibility to the businessman, some high winds caused us all to look up, by blowing down a small tree a little further along the wall, almost taking down a large block of stone with it.

This section of the wall does not have weep-holes, which is why you can see water squeezing it's way through the weakest joint in it, about 12 feet up.

I really hope the engineers in the council do not allow him to plug every hole in this wall with a mouthless gargoyle... 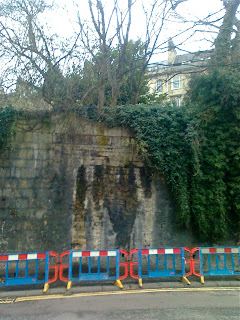