I can't give it away 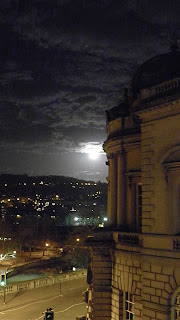 I am - in many ways - so naive. I often expect people to be as childishly enthusiastic as I would be about getting something worth having for nothing, but the modern world just does not seem to work like that. I'm not even sure if the old one did either.

Over the years I have had one or two ideas for projects which - maybe through mistaken arrogance - I thought were actually worth carrying out, but knocking on the doors of the decision-makers has never brought any results. It is a bit like you have to do them first, then ask for permission afterwards. Having done that, you then have what is known as a 'track record', if they haven't shut you down using the law first.

This latest idea (I usually have about one every ten or fifteen years) could easily be carried out without the permission of the beneficiary, because it involves projecting light images onto the wall of a publicly-owned building, using projectors mounted on another, and would be timed to coincide with next year's Arts Festival. I am not sure what powers they would have to stop me doing this, other than getting the police to shut me down for causing a public nuisance, or a danger to the traffic. There would - after all - be no physical contact with their building other than bombarding it with photons. It would be like suing the moon for being full.

Around the end of the 19th century, a couple of titled people had a bet with each other in their club one night, as to how many five-pound notes they could give away in the street (around Piccadilly, London) whilst dressed as tramps. Five pounds was a lot of money in those days. So one of them went out the next morning with about £1000 worth of fivers, and stood around offering to hand them out to passers-by. Only one person took up the offer all day.

Many years ago, I registered a company name at Company House, then set about trying to find a dis-used part of a quarry to construct a sculptural landscape. I arranged a meeting with the head of the National Trust at Stourhead in order to ask for permission to create an entirely theoretical landscaping project on their land above the cliffs at Charmouth in Dorset, and the Head - somewhat perplexed as to why I sought his permission for a project which would never be carried out in any way except on paper - gave it to me.

Thus armed with a letter of authority on official National Trust notepaper and signed by it's head, I wrote to various quarries and put forward my suggestion. Most of them politely turned me down on the grounds that they already had a re-landscaping project in progress, but one (who obviously didn't) strung me along for months, until I finally realised that it was never going to happen.

I had already acquired sponsorship (to the tune of many thousands of pounds) from various companies and institutions - including the Arts Council - and set one against the other by implying I had already received a commitment from all of them except the one who I had just sent this letter to... and they all received exactly the same letter. Sneaky, eh? Well, no, actually - not sneaky enough.

I let myself down through an ignorance of the politics attached to the re-landscaping of open areas - politics which had just changed through legislation which required all open quarries to actually have a re-landscaping scheme in place before an extension of mining and mineral rights was granted by local and national authorities.

I seem to have let myself down through ignorance again. Having sent a letter to the head of this particular institution offering this 'installation' for 'free' (I am pretty sure I could raise the pittance it would take from local business contacts), I opened the local paper a few days later to learn of an argument between it and the local authorities as to whether or not an entrance fee can be charged to visitors who have - for the last twenty years or so - been going into the place to see the public collections at no charge.

I have yet to receive a reply of any sort from this particular civil servant, and unless I resend the letter and sign it either 'Damien Hirst' or 'Rachel Whiteread', I don't think I ever will.

In a way I don't blame them. I'm not sure that I want any old Tom, Dick or Harriet to foist their art on me at will, either. Maybe I would prefer to spend about £150,000 of public money on a tried and tested, bad artist as well. It's less of a personal risk.
at January 15, 2013